Bringing Tibetan Art Back to Life 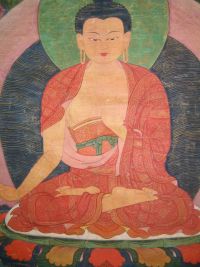 Thangkas are sacred Buddhist paintings that date back to the eleventh century. Often painted by monks, they reflect the spiritual aspirations of one of the most extraordinary civilizations on the planet. Tibetans revere these paintings as embodying the very living presence of the enlightened beings and the principles that they represent.

Thang-ka is translated as "painting that rolls". This was done in order to transport them between monasteries as they were used as tools for meditation and visualization practices .and were often hidden from sight by many silk veils from those who were not indoctrinated into the particular practices they required.

His Holiness the Dalai Lama carried a thangka painting of Tibet's protector goddess Lhamo with him during his exodus from the country. One cannot over estimate the importance of these paintings that portray Buddhas, bodhisattvas, mandalas and wrathful protector deities in the cultural life of the Tibetan peoples. They are one of the main keys towards understanding the profound philosophical system that underlies the Tibetan worldview, which was profoundly tested by the Chinese invasion in 1959. Despite the destruction of over 6,000 monasteries, many thangkas survived the holocaust and exist today in collections throughout the world. They are still being created today, both within and outside the motherland.

Thangka conservation is a relatively small field that requires intimate knowledge of materials, iconography and the context in which these marvelous paintings were created.